Partners from a large island: Australia and CSDP 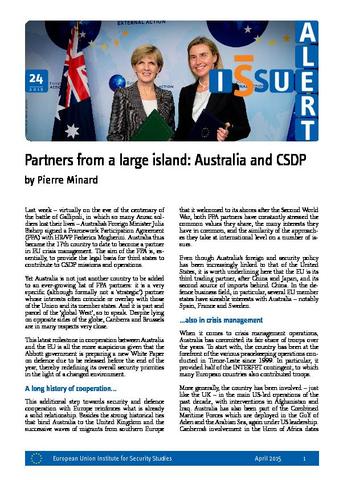 Last week – virtually on the eve of the centenary of the battle of Gallipoli, in which so many Anzac soldiers lost their lives – Australia’s Foreign Minister Julia Bishop signed a Framework Participation Agreement (FPA) with HR/VP Federica Mogherini. Australia thus became the 17th country to date to become a partner in EU crisis management. The aim of the FPA is, essentially, to provide the legal basis for third states to contribute to CSDP missions and operations. This latest milestone in cooperation between Australia and the EU is all the more auspicious given that the Abbott government is preparing a new White Paper on defence due to be released before the end of the year, thereby redefining its overall security priorities in the light of a changed environment.