One year on: lessons from Iraq 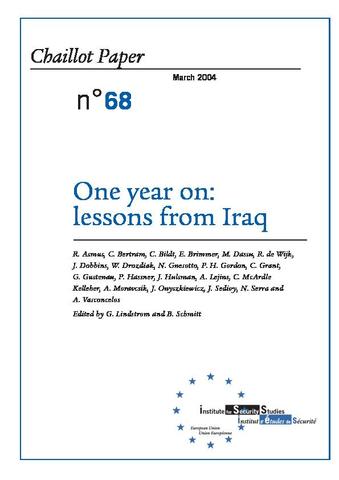 The war on Iraq was without any doubt the main international event in the security arena in 2003. In 2004, the ramifications of the war are taking centre stage as policy-makers gauge the future of Iraq, the Middle East, transatlantic relations and the role of international organisations. This Chaillot Paper takes stock of the consequences of the Iraqi war one year after the initiation of the military campaign in March 2003. Rather than provide a definitive or conclusive verdict on the implications of the war, its objective is to offer a number of viewpoints concerning developments in its aftermath. Given the divergences that the war created, not only between the United States and Europe but also within the EU, we invited a wide spectrum of authors to participate in this project in order to get as representative a picture as possible. To do so, twenty-one authors from Europe and the United States were asked to respond to five questions covering different aspects of international relations. The net result is a vivid and complex picture of the state of international affairs, providing a unique snapshot of developments post-Iraq – including perceptions of their intended and unintended consequences.