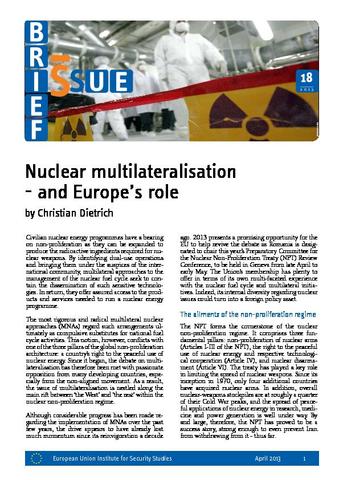 Civilian nuclear energy programmes have a ­bearing on non-proliferation as they can be expanded to produce the radioactive ingredients required for nuclear weapons. By identifying dual-use ­operations and bringing them under the auspices of the international community, multilateral approaches to the management of the nuclear fuel cycle seek to contain the dissemination of such sensitive technologies. In return, they offer assured access to the products and services needed to run a nuclear ­energy programme.

The most radical multilateral nuclear approaches (MNAs) regard such arrangements ultimately as compulsive substitutes for national fuel cycle ­activities. This notion, however, conflicts with one of the three pillars of the global non-proliferation architecture: a country’s right to the peaceful use of nuclear energy. Since it began, the debate on multilateralisation has therefore been met with ­passionate opposition from many developing countries, especially from the non-aligned ­movement. Hence, the issue of multilateralisation is nestled along the main rift between ‘the West’ and ‘the rest’ within the nuclear non-proliferation regime.

Although considerable progress has been made regarding the implementation of MNAs over the past few years, the drive appears to have already lost much momentum since its reinvigoration a ­decade ago. 2013 presents a promising opportunity for the EU to help revive the debate as Romania is designated to chair this year’s Preparatory ­Committee for the Nuclear Non-Proliferation Treaty (NPT) ­Review Conference, to be held in Geneva from late April to early May. The Union’s membership has plenty to offer in terms of its own multi-faceted experience with the nuclear fuel cycle and multilateral initiatives. Indeed, its internal diversity regarding ­nuclear issues could turn into a foreign policy asset.