No Euro-Mediterranean community without peace 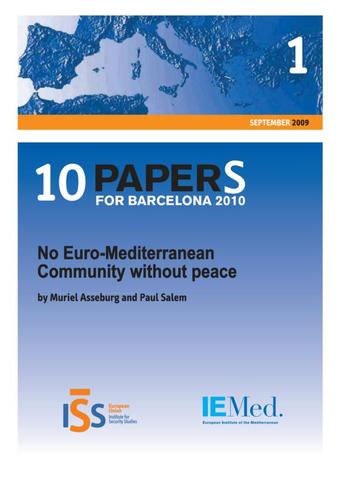 This is the first in a series of ten papers published jointly by the EUISS and the European Institute for the Mediterranean (IEMed) which aim to address ten critical topics for Euro-Mediterranean relations. The papers have been commissioned with a view to formulating policy options on a set of issues which are central to achieving the objectives set out in the 1995 Barcelona Declaration and the Paris declaration of 2008, as well as defining new targets for 2020 in the political, economic and social spheres.

This first paper looks at the prospects for Euro-Mediterranean initiatives against the current troubled backdrop of the Middle East, and in particular the Israeli-Palestinian conflict. It is clear that the long-term objective of creating a Euro-Mediterranean Community will not be fulfilled without a lasting peace being established in the region. The authors put forward a set of proposals on how Europe should contribute to resolving the Middle East crisis – and in particular on how to take advantage of the window of opportunity afforded by the change in American policy that has followed the election of President Obama.

Why Europe must engage with political Islam