National Missile Defence and the future of nuclear policy 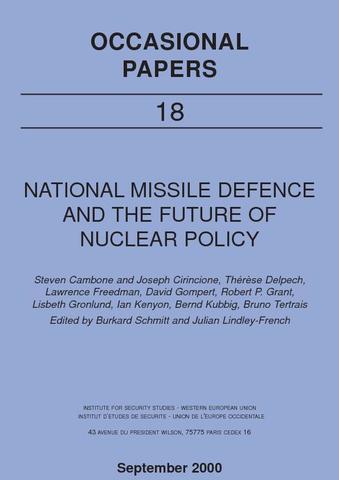 The first session focused on threat perceptions and threat assessments. The key question was whether a threat exists that justifies NMD deployment. Do the so-called ‘countries of concern’ really intent to threaten the US homeland and, even more importantly, do they have the financial and the technological means to scale up their existing arsenal to true intercontinental range? Proponents of NMD deployment referred to the 1998 Rumsfeld Report, concluding that North Korea, Iran and Iraq could develop ballistic missiles with NBC warheads within about five years of a decision to acquire such a capability. There would be increasingly important cooperation between these countries, and their respective missile programmes would make real progress. These developments would threaten not only US territory, but also regional stability in Asia and the Middle East. Opponents considered this threat assessment as largely exaggerated. Only four nations (India, Pakistan, North Korea and Iran) would have active programmes for developing intermediate-range missiles of over 3,000 km in the next 10 years. Even if these programmes succeeded, none of these missiles could threaten US territory. Moreover, it would be highly unlikely that countries like North Korea could ever make sufficient progress in propulsion, guidance, airframe, warhead and re-entry vehicle technology to develop ICBMs. The current US threat assessment, opponents thought, would be based only on worst-case assumptions and completely neglect the possibility of political changes in countries of concern. The real threat would not come from nation-states with nuclear weapons and long-range missiles, but from non-state actors with non-nuclear weapons and short-range, non-missile delivery systems.

The potential unintended consequences of missile defence in Europe