Monitoring the BiH integration processes: a comparative report for 2009 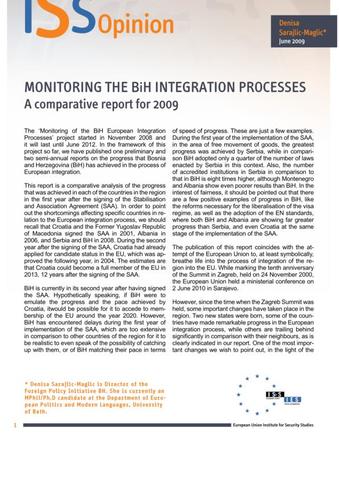 Over the last ten years since the Zagreb Summit opened the way for Western Balkan countries to approximate to EU standards through the Stabilisation and Association Process, the spirit of regional cooperation seen at the summit has deteriorated.

While the technical mechanisms for regional cooperation remain through initiatives such as the Regional Cooperation Council, the political dimension has all but faded completely.

Some of the countries of the Western Balkans have made remarkable progress in the European integration process, while others are trailing behind significantly in comparison to their neighbours. A process guiding the region as a whole would have avoided such disparity, the author argues.

The publication of this report coincides with the attempt of the European Union to breathe new life into the integration process. Forming part of the ‘Monitoring of the BiH European Integration Process’, this report is a comparative analysis of the progress that was achieved in each of the countries in the Western Balkans in the first year after signing the Stabilisation and Association Agreement (SAA).

The Balkans by 2030: present trends and future challenges

The issues raised by Bosnia, and the transatlantic debate

The Bosnian war and the new world order