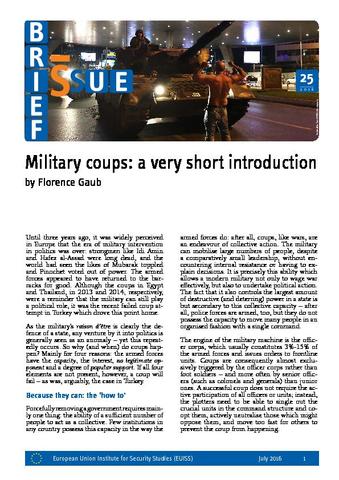 Until three years ago, it was widely perceived in Europe that the era of military intervention in politics was over: strongmen like Idi Amin and Hafez al-Assad were long dead, and the world had seen the likes of Mubarak toppled and Pinochet voted out of power. The armed forces appeared to have returned to the barracks for good. Although the coups in Egypt and Thailand, in 2013 and 2014, respectively, were a reminder that the military can still play a political role, it was the recent failed coup attempt in Turkey which drove this point home. As the military’s raison d’être is clearly the defence of a state, any venture by it into politics is generally seen as an anomaly – yet this repeatedly occurs. So why (and when) do coups happen? Mainly for four reasons: the armed forces have the capacity, the interest, no legitimate opponent and a degree of popular support. If all four elements are not present, however, a coup will fail – as was, arguably, the case in Turkey.