Kosovo’s local elections and the way ahead 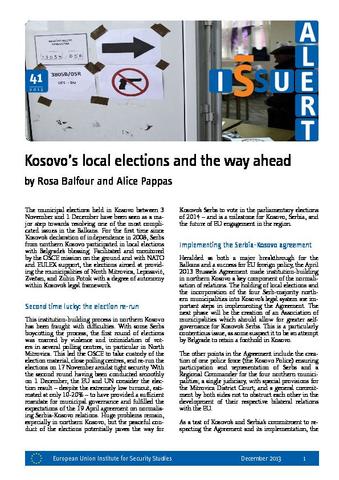 The municipal elections held in Kosovo between 3 November and 1 December have been seen as a major step towards resolving one of the most complicated issues in the Balkans. For the first time since Kosovo’s declaration of independence in 2008, Serbs from northern Kosovo participated in local elections with Belgrade’s blessing. Facilitated and monitored by the OSCE mission on the ground and with NATO and EULEX support, the elections aimed at providing the municipalities of North Mitrovica, Leposavić, Zvečan, and Zubin Potok with a degree of autonomy within Kosovo’s legal framework. With the second round having been conducted smoothly on 1 December, the EU and UN consider the election result to have provided a sufficient mandate for municipal governance and fulfilled the expectations of the 19 April agreement on normalising Serbia-Kosovo relations.