Israel and the Free Gaza flotilla: a catalogue of mistakes 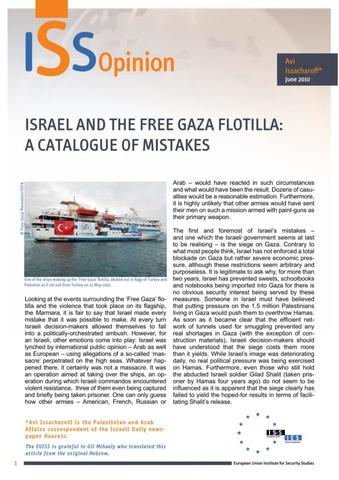 Looking at the events surrounding the ‘Free Gaza’ flotilla and the violence that took place on its flagship, the Marmara, it is fair to say that Israel made every mistake that it was possible to make. At every turn Israeli decision-makers allowed themselves to fall into a politically-orchestrated ambush. However, for an Israeli, other emotions come into play: Israel was lynched by international public opinion – Arab as well as European – using allegations of a so-called ‘massacre’ perpetrated on the high seas. Whatever happened there, it certainly was not a massacre. It was an operation aimed at taking over the ships, an operation during which Israeli commandos encountered violent resistance,  three of them even being captured and briefly being taken prisoner. One can only guess how other armies – American, French, Russian or Arab – would have reacted in such circumstances and what would have been the result. Dozens of casualties would be a reasonable estimation. Furthermore, it is highly unlikely that other armies would have sent their men on such a mission armed with paint-guns as their primary weapon.

The first and foremost of Israel’s mistakes – and one which the Israeli government seems at last to be realising – is the siege on Gaza. Contrary to what most people think, Israel has not enforced a total blockade on Gaza but rather severe economic pressure, although these restrictions seem arbitrary and purposeless. It is legitimate to ask why, for more than two years, Israel has prevented sweets, schoolbooks and notebooks being imported into Gaza for there is no obvious security interest being served by these measures. Someone in Israel must have believed that putting pressure on the 1.5 million Palestinians living in Gaza would push them to overthrow Hamas.