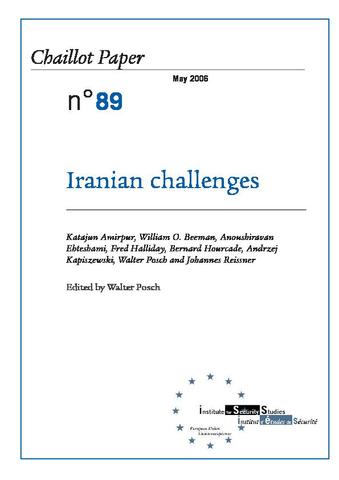 It is no exaggeration to say that the Islamic Republic of Iran has posed a challenge to the West since the very day of its inception. Tensions between Iran and the US and Israel were high through-out the 1980s and 1990s. However, since 2002 and especially in the wake of the election of Mahmoud Ahmadinejad as President, concerns about Iran's nuclear issue have further worsened relations, to such an extent that the US identified Iran as a main security challenge in its National Security Strategy of March 2006. For this Chaillot Paper, a number of respected academics who are specialists in international relations and Iranian studies were asked to contribute chapters analysing Iran through the lens of their expertise. The volume covers three main areas: Iran's domestic affairs; Iran and security; and Iran's relations with the West. The authors touch on various topics, including the repercussions of the June 2005 elections and the advent of President Ahmadinejad, the future of the reform movement in Iran, Iranian-American and EU-Iran relations, and - inevitably - the critical nuclear issue. The nuclear standoff has forced the EU to embrace a unique tool of diplomacy: the E3/EU format, which has given the EU diplomatic and political flexibility and ensured inner European cohesion. This format has been the latest chapter in a long series of dialogue formulas between the EU and Iran. It is imperative that the EU continues its engagement with the Islamic Republic. And, as this Chaillot Paper shows, in doing so, it will not only have to take transatlantic relations into account but will also be obliged to consider new regional realities provoked by the war in Iraq and internal Iranian dynamics. It is therefore urgent and necessary for the EU to find an approach that will enable it to craft an effective policy to address the new challenges