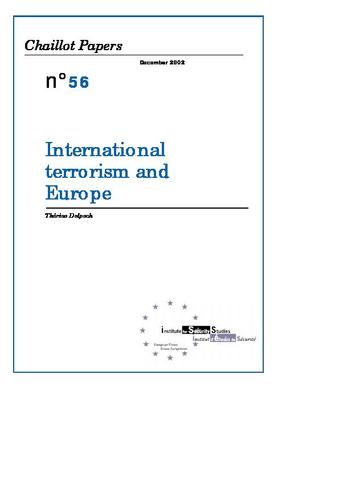 The events of 11 September moved all Europeans but were never understood for what they really were: the return of war to the most developed societies. The emotion thus quickly gave way to the belief that this had been an isolated event, or at least one that would not be repeated on the same scale. The first reason for this is that 11 September, even if it has often been perceived as an attack on the entire Western world, did not happen in Europe. There is also a widespread refusal in Europe, after the turbulent history of the twentieth century, to admit that European territory might in the new century be vulnerable to serious threats. Lastly, European leaders were anxious not to frighten their populations or to strain relations with the Muslim minorities living in Europe. And yet since the middle of the 1990s there has been no shortage of attempts to carry out attacks in Europe or against European inter-ests and citizens abroad. These attacks have revealed the existence of a new generation of terrorists quite unlike those with which Europe was previously familiar. Terrorist networks of this new type still exist in Europe and continue to plan attacks despite the few hundred arrests made since September 2001. These networks have the advantage of the considerable freedom of movement and expression common to European countries, and also benefit from the absence of a common police and judicial system. As a result of the reaction in Europe to the attacks on New York and Washington, real improvements have been made in key areas, but progress is still too slow compared with that achieved by the terro-rists and their increasingly sophisticated knowledge and assets, including in the field of weapons of mass destruction. In November 2002 several major capitals considered it necessary to warn their populations of the risk of terrorist attacks on a wide scale, a reminder that, contrary to the received wisdom, Europe is now as much at risk as America.