The Institute's quarterly newsletter No. 33 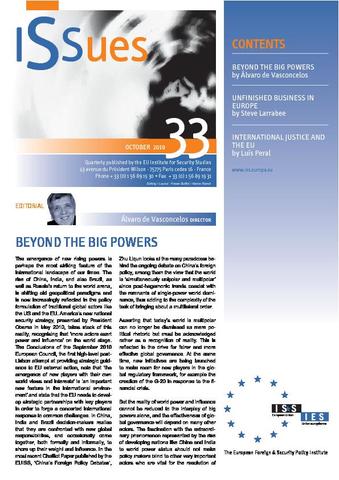 In this ISSue: Beyond the big powers
by Álvaro de Vasconcelos
The reality of world power and influence cannot be reduced to the interplay of big powers alone. The effectiveness of global governance will depend on many other actors. European security: unfinished business in Europe
by F. Stephen Larrabee
Bosnia's increasing political paralysis and the unsettled business of Kosovo's independence represent major challenges for the EU. The EU must also clarify what it is offering countries on the eastern periphery and find a way to engage Russia in stabilising the region. Turkey's role and interests must also be considered in developing a Western policy toward the eastern periphery. The EU in the world: international justice and the EU
by Luis Peral
The EU should show renewed leadership in taking action against states in violation of fundamental international obligations. It should further develop effective capacities to exercise the Responsibility to Protect towards populations in danger.