The Institute's quarterly newsletter No. 31 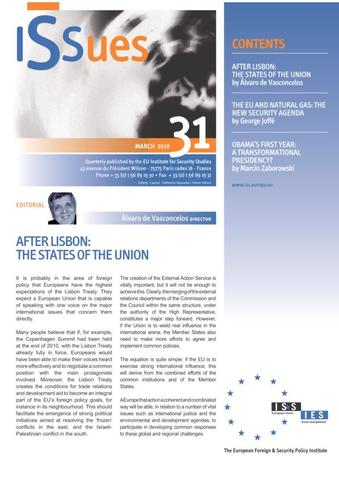 In this issue: After Lisbon: the States of the Union
editorial by Álvaro de Vasconcelos
In the post-Lisbon Treaty era, the support and commitment of all EU Member States will be as crucial as ever. The EU and natural gas: the new security agenda
opinion piece by George Joffe
Energy supply must feature more prominently on the EU’s security agenda if it is to break the Russian stranglehold on natural gas. Obama's first year: a transformational presidency?
opinion piece by Marcin Zaborowski
It has been over a year since US President Barack Obama’s historic election and his promise of change. But has he delivered?