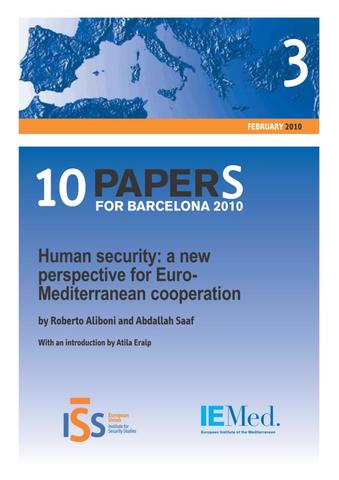 The existence of regional conflicts and inter-state wars, such as the Arab-Israeli conflict and the War in Iraq, have reinforced the emerging need to strengthen cooperation policies to restore peace in the region. In order to meet such challenges, the EU initiated the Barcelona Process. However, the Barcelona Process has been widely criticised in countries on both the Northern and Southern shores of the Mediterranean for failing to achieve its goals of political reforms, regional cooperation and consolidation of cooperation in security building.

In their respective chapters, Roberto Aliboni and Abdallah Saaf emphasise that security is a crucial field of cooperation in strengthening the Euro-Mediterranean relationship and that there is a need to re-evaluate EU policies in the changing international context. They both underline the need to go beyond conventional understandings of security and to pay attention to ‘human security’ in helping to solve the ongoing political conflicts and promote regional peace and stability in the Euro-Mediterranean region.

Why Europe must engage with political Islam

No Euro-Mediterranean community without peace