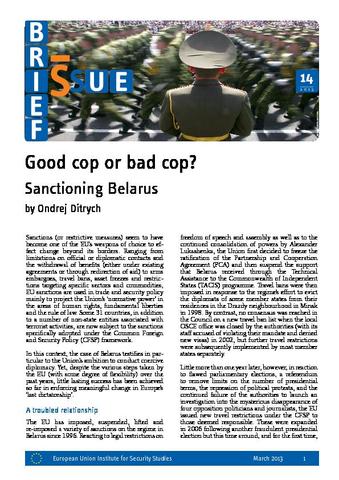 Sanctions (or restrictive measures) seem to have become one of the EU’s weapons of choice to effect change beyond its borders. Ranging from limitations on official or diplomatic contacts and the withdrawal of benefits (either under existing agreements or through redirection of aid) to arms embargoes, travel bans, asset freezes and restrictions targeting specific sectors and commodities, EU sanctions are used in trade and security policy mainly to project the Union’s ‘normative power’ in the areas of human rights, fundamental liberties and the rule of law. Some 31 countries, in addition to a number of non-state entities associated with terrorist activities, are now subject to the sanctions specifically adopted under the Common Foreign and Security Policy (CFSP) framework.

In this context, the case of Belarus testifies in particular to the Union’s ambition to conduct coercive diplomacy. Yet, despite the various steps taken by the EU (with some degree of flexibility) over the past years, little lasting success has been achieved so far in enforcing meaningful change in Europe’s ‘last dictatorship’.