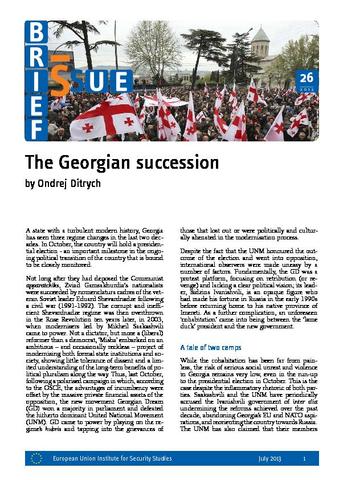 A state with a turbulent modern history, Georgia has seen three regime changes in the last two decades. In October, the country will hold a presidential election; an important milestone in the ongoing political transition of the country that is bound to be closely monitored.
Last October, following a polarised campaign the new movement Georgian Dream (GD) won a majority in parliament and defeated the hitherto dominant United National Movement (UNM). But despite the fact that the UNM honoured the outcome of the election and went into opposition, international observers were made uneasy by a number of factors. Fundamentally, the GD was a protest platform, focusing on retribution (or revenge) and lacking a clear political vision, and its leader, Bidzina Ivanishvili, is an opaque figure who had made his fortune in Russia in the early 1990s before returning home to his native province of Imereti. As a further complication, an unforeseen ‘cohabitation’ came into being between the ‘lame duck’ president and the new government.