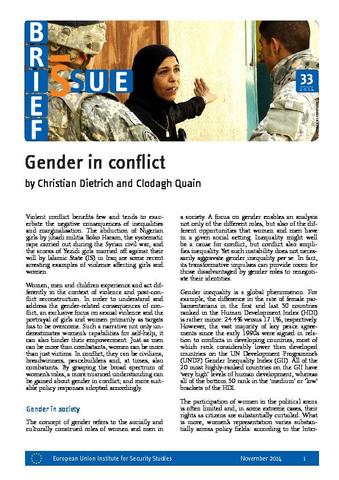 Violent conflict benefits few and tends to exacerbate the negative consequences of inequalities and marginalisation. The abduction of Nigerian girls by jihadi militia Boko Haram, the systematic rape carried out during the Syrian civil war, and the scores of Yezidi girls married off against their will by Islamic State (IS) in Iraq are some recent arresting examples of violence affecting girls and women. Women, men and children experience and act differently in the context of violence and post-conflict reconstruction. In order to understand and address the gender-related consequences of conflict, an exclusive focus on sexual violence and the portrayal of girls and women primarily as targets has to be overcome. Such a narrative not only underestimates women’s capabilities for self-help, it can also hinder their empowerment. Just as men can be more than combatants, women can be more than just victims. In conflict, they can be civilians, breadwinners, peacebuilders and, at times, also combatants. By grasping the broad spectrum of women’s roles, a more nuanced understanding can be gained about gender in conflict; and more suitable policy responses adopted accordingly.