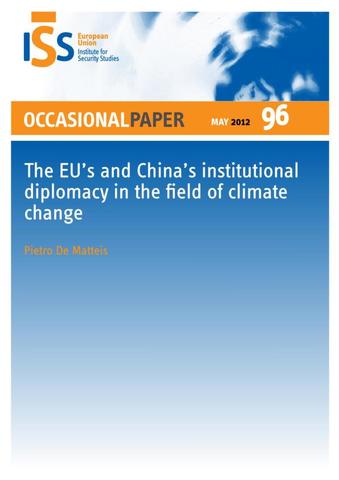 This Occasional Paper aims at providing a new perspective on the relevance of climate change for the EU’s external action. Considering its linkages with various areas such as energy security, economic growth and diplomacy, and indeed its importance in terms of future political stability, climate change is a major ‘game-changer’ in international relations. The issue of climate change, and how to deal with it, therefore presents governments with a significant opportunity to reshape the international order in the light of the major global transformations currently underway. The development of the climate change regime presents the EU with both an opportunity and a threat, in as much as it may either accelerate Europe’s decline as a foreign policy actor or, on the contrary, reinvigorate its diplomatic ambitions.

In this framework, existing institutions are of strategic importance for the EU. Firstly, they can protect the status quo, and with it the privileges that EU Member States have gained as part of the legacy of the post-World War II and the Cold War eras (as reflected, for instance, in the over-representation of Europe in most international organisations). Secondly, institutions may reinforce the EU’s foreign policy capabilities, allowing it to play an important role within those multilateral frameworks tasked with tackling new global challenges such as climate change. Despite its past successes, however, the EU faces increasing competition from new ‘norm setters’ such as China. Over the past two decades, in fact, the People’s Republic of China (PRC) has played an increasingly pivotal role in international relations, and this is particularly the case in the field of climate change. China, in fact, has managed to influence the global negotiating strategy and discourse, and has been successful in building large coalitions in support of its views.

Given the increasing prominence of climate change in international relations as well as the relatively short timespan in which it has emerged as an urgent issue, analysing the evolution of the climate change regime makes it possible to identify some of the key elements of change in the international system. These include the emergence of new actors, their changing behaviour as they have become more influential (e.g. as in the case of China), and the evolution of the international environment towards more regulation and legalisation, as advocated by developed nations – and first and foremost the EU – in order to guarantee their interests. After having explored the above-mentioned aspects and focused on the role of the EU and China in the shaping of the climate change regime, this Occasional Paper offers some suggestions on how the EU may cope with this changing environment, including calls for increased EU coherence and a strategic approach to climate change-related issues. This analysis should help the Union to put its challenges and strengths into perspective, and contribute to the definition of a European Grand Strategy able to reinforce the EU’s position in the years ahead.