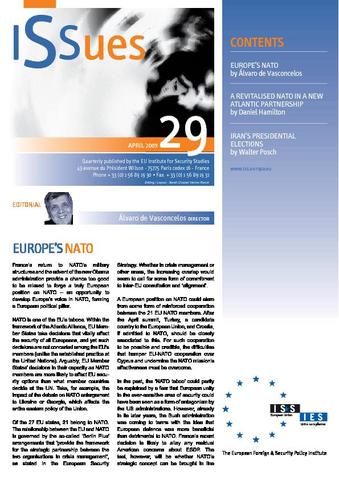 France’s return to NATO’s military structures and the advent of the new Obama administration provide a chance too good to be missed to forge a truly European position on NATO – an opportunity to develop Europe’s voice in NATO, forming a European political pillar.

Also in this issue:

A revitalised NATO in a new Atlantic partnership

President Obama’s meetings with NATO and EU leaders in early April offer a rare opportunity to press the ‘reset’ button on relations between Europe and North America. They must seize the moment to recast the Atlantic partnership - in all of its dimensions - to tackle a diverse range of challenges at home and abroad.

In June 2009 Iranians will go to the polls to elect their next president. Iran does not have stable party structures, but rather loose coalitions of individuals and interest groups. However, two main political camps can be identified, namely the so-called reformists and the non-reformists. Both justify their existence and their activities on the basis of Khomeini’s Islamist ideology, their revolutionary credentials and the war record of their members.