European security across the Mediterranean 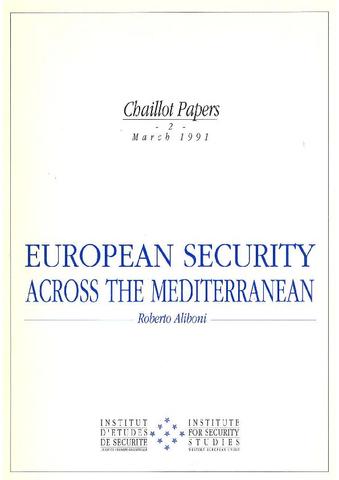 Whether the countries of the Mediterranean littoral are linked by special bonds of solidarity is and will remain a much-debated question. After the Second World War, anti-imperialist and non-aligned thinking advocated such solidarity on the grounds that countries as diverse as Egypt and Italy, or Spain and Algeria, were none the less equally subject to political and economic domination by the more advanced countries of Northern Europe and North America. This hypothesis, though not without its effect on the political positions of Mediterranean governments, has proved to be unfounded. The countries of Southern Europe have become increasingly integrated into the European Community, while the Arab countries of the Mediterranean have remained part of the Arab and Islamic world. The Mediterranean is not, therefore, a `centre', naturally destined to breed solidarity, but rather a `frontier' separating worlds that are culturally, economically and politically very far apart - the Judæo-Christian and the Islamic; the developed and the underdeveloped; the democratic and the authoritarian. This does not mean that cooperation and security across this frontier are precluded. As the French historian Fernand Braudel pointed out, the Mediterranean is also a `crossroads', open to influences and exchanges and therefore to cooperation and security as well as to conflict and tensions; a crossroads, however, which still divides different parts of the Mediterranean. This means that cooperation and security are possible but cannot be taken for granted. They require an effort of will and specific management.