European force structures: Papers presented at a seminar held in Paris on 27 & 28 May 1999 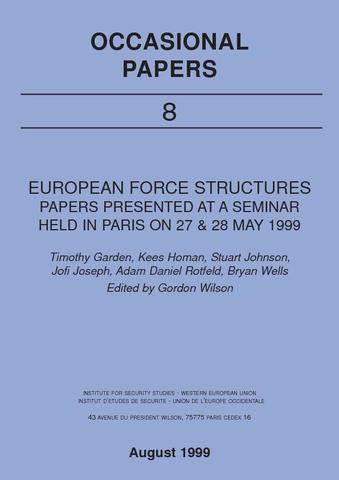 The enclosed papers were presented at a conference held in Paris from 27-28 May.&nbsp; This could not have been more timely, coming as it did immediately after the Washington and Bremen summits and shortly before the Cologne summit at a period when Europe was being subject to considerable scrutiny, both from within and without, about its overall composite capabilities in the light of the Kosovo operation then still under way.&nbsp; The aim of the seminar, which had been selected several months earlier, was to examine European force structures in order to see what could be done to improve European corporate defence capabilities and thus give Europe greater credibility for operations conducted both with and without American participation.&nbsp; The severe shortcomings that had become very evident during the air campaign against Serbia and Serbian forces in Kosovo underlined the limited impact of European forces and the fact that they were unable to conduct such a campaign at the level of intensity or technical capability of the United States.&nbsp; There was a particularly high standard of debate stimulated by the excellent papers, a selection of which is presented together in this WEU Institute <i>Occasional Paper</i>.