Europe in Tunisia: a standby actor or the main character? 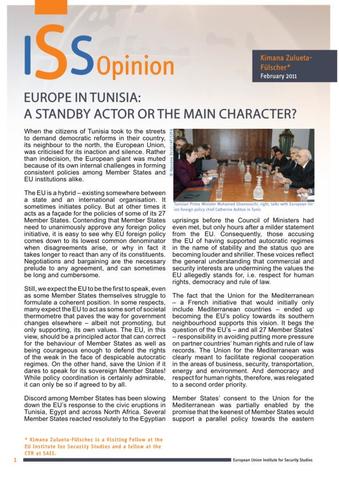 It is easy to see why EU foreign policy comes down to its lowest common denominator when disagreements arise, or why in fact it takes longer to react than any of its constituents. Negotiations and bargaining are the necessary prelude to any agreement, and can sometimes be long and cumbersome.

Still, we expect the EU to be the first to speak, even as some Member States themselves struggle to formulate a coherent position. In some respects, many expect the EU to act as some sort of societal thermometre that paves the way for government changes elsewhere – albeit not promoting, but only supporting, its own values. The EU, in this view, should be a principled actor that can correct for the behaviour of Member States as well as being courageous enough to defend the rights of the weak in the face of despicable autocratic regimes. On the other hand, save the Union if it dares to speak for its sovereign Member States! While policy coordination is certainly admirable, it can only be so if agreed to by all.

Discord among Member States has been slowing down the EU’s response to the civic eruptions in Tunisia, Egypt and across North Africa. Several Member States reacted resolutely to the Egyptian uprisings before the Council of Ministers had even met, but only hours after a milder statement from the EU. Consequently, those accusing the EU of having supported autocratic regimes in the name of stability and the status quo are becoming louder and shriller. These voices reflect the general understanding that commercial and security interests are undermining the values the EU allegedly stands for, i.e. respect for human rights, democracy and rule of law.