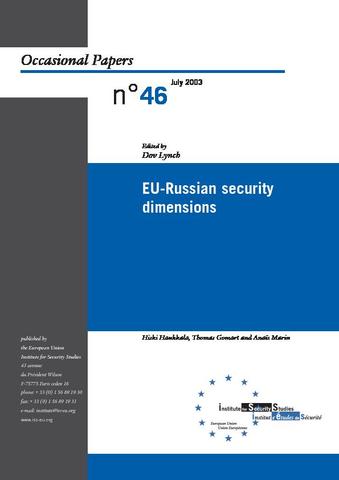 EU-Russian security cooperation remains nascent, but some important ground has been cleared since 2000. Yet, the dialogue is neither without ambiguity or problems. It is replete with both. This Occasional Paper examines three facets of EU-Russia security relations. The first chapter, by Hiski Haukkala, compares EU and Russian perceptions of the other in security terms. Haukkala traces the evolution of EU thinking on Russia throughout the 1990s, highlighting the obstacles that held up the development of a strategic vision of the ‘partnership’. Following an analysis of how Russia views the EU, he concludes that both have different visions of the other which lie at the source of problems of perception and expectation. In the second chapter, Thomas Gomart concentrates on a single aspect of the EU’s Common Strategy on Russia (1999), that of preventive diplomacy, examined through the cases of Belarus and Macedonia. Gomart notes the absence of coordination between the EU and Russia in the former Soviet Union and the Balkans, and stresses the need for greater effort. Gomart notes also the danger of blurring the lines between the ‘preventive’ and the ‘pre-emptive’, particularly with regard to counter-terrorism. Anaïs Marin concludes this Occasional Paper with an examination of the Northern Dimension. Marin notes the unique utility of the ‘dimensionalist’ approach to EU - Russian relations, which takes in a wide range of subjects and different types of actors within a flexible framework. In conclusion, she rejects calls for a greater institutionalisation of the Northern Dimension, arguing that flexibility and ‘lightness’ are its strengths.