The EU, NATO and European Defence: a slow train coming 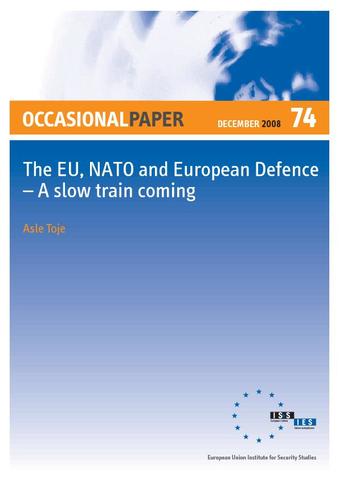 This Occasional Paper is devoted to the proposals on European defence under discussion during the 2008 French EU Presidency. While Americans and Europeans alike support stronger EU-NATO cooperation, the output has so far been unsatisfactory. This paper examines specific initiatives for a stronger, more unitary European security structure.

The first section examines three broad trends that point to a revised transatlantic bargain and that are providing a favourable environment for the current initiatives: (i) demands for more, not less, EU defence policy; (ii) the altered role of Europe in American foreign policy, and (iii) NATO’s transformation challenge. The second section traces three sets of specific policy initiatives to strengthen European security on institutional and capability levels: (i)improving ESDP-NATO cooperation; (ii) strengthening European Security and Defence Policy and (iii) military capability initiatives. The paper also offers thoughts on the prospects and pitfalls of the current process. For the ongoing process to meet its objectives it will have to overcome deep-seated political differences and structural hurdles. The conclusion is nevertheless that the new initiatives have a better chance of making substantial progress than past endeavours due to a focused agenda and a favourable international climate.