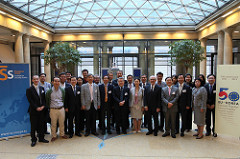 On 24 July 2013, the European Union and the Republic of Korea will celebrate the 50th anniversary of the establishment of bilateral diplomatic relations. The two sides have gone through major changes over the last five decades. The six original members of the European Community have expanded to the current EU-28, creating the largest market in the world. South Korea has gone from authoritarian rule to a fully-fledged democracy, while also becoming a member of the OECD. Today, the two sides - despite wide cultural and geographic distances - share the same commitment to democracy, human rights and market economy.

North East Asia is one of the world’s key engines for economic growth. The security climate has, however, deteriorated in the last months, following the provocations of Pyongyang and the announcement on 30 March 2013 that it had entered a ‘state of war’ with Seoul. Furthermore, China’s growing assertiveness and the US rebalancing towards the region, coupled with the strain of Sino-Japanese and Korea-Japanese relations over territorial and maritime claims contribute to a rather gloomy picture. Although geographically distant, the region today accounts for almost a quarter of Europe’s global trade. This raises the question as to whether the EU should enhance its political involvement in the area, including potentially increasing security cooperation with South Korea, Japan and China in order to address both traditional and un-conventional security threats.

With the aim of furthering discussions on these topics and provide concrete suggestions to policy makers, the EU Institute for Security Studies (EUISS), in collaboration with the Asia-Pacific division of the European External Action Service (EEAS) and in partnership with the Korean Society of Contemporary European Studies (KSCES), organised an expert seminar on Thursday 11 July 2013. The first session assessed and examined the state of EU-South Korea relations. The following sessions focused on security developments in North East Asia with the aim of discussing the security role of the EU in the area, including emerging avenues for cooperation between the EU and South Korea.