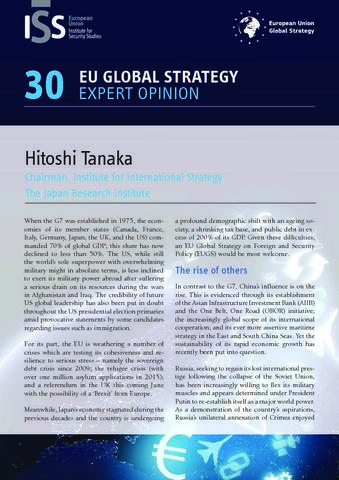 When the G7 was established in 1975, the economies of its member states (Canada, France, Italy, Germany, Japan, the UK, and the US) commanded 70% of global GDP; this share has now declined to less than 50%. The US, while still the world’s sole superpower with overwhelming military might in absolute terms, is less inclined to exert its military power abroad after suffering a serious drain on its resources during the wars in Afghanistan and Iraq. The credibility of future US global leadership has also been put in doubt throughout the US presidential election primaries amid provocative statements by some candidates regarding issues such as immigration.

For its part, the EU is weathering a number of crises which are testing its cohesiveness and resilience to serious stress – namely the sovereign debt crisis since 2009; the refugee crisis (with over one million asylum applications in 2015); and a referendum in the UK this coming June with the possibility of a ‘Brexit’ from Europe.