The EU and Japan: making the most of each other 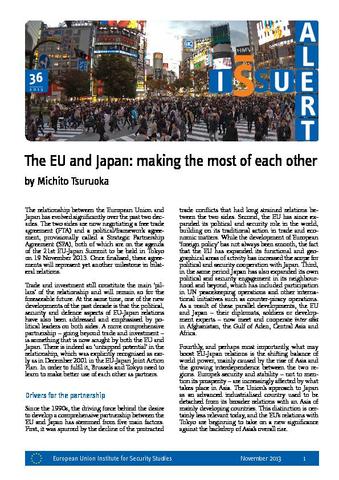 The relationship between the European Union and Japan has evolved significantly over the past two decades. The two sides are now negotiating a free trade agreement (FTA) and a political/framework agreement, provisionally called a Strategic Partnership Agreement (SPA), both of which are on the agenda of the 21st EU-Japan Summit to be held in Tokyo on 19 November 2013. Once finalised, these agreements will represent yet another milestone in bilateral relations. Trade and investment still constitute the main ‘pillars’ of the relationship and will remain so for the foreseeable future. At the same time, one of the new developments of the past decade is that the political, security and defence aspects of EU-Japan relations have also been addressed and emphasised by political leaders on both sides. A more comprehensive partnership – going beyond trade and investment – is something that is now sought by both the EU and Japan. There is indeed an ‘untapped potential’ in the relationship, which was explicitly recognised as early as in December 2001 in the EU-Japan Joint Action Plan. In order to fulfil it, Brussels and Tokyo need to learn to make better use of each other as partners.