The EU and China’s engagement in Africa: the dilemma of socialisation 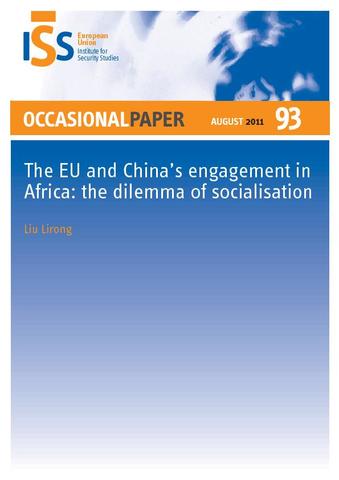 China’s engagement in Africa has obliged the EU to re-evaluate its own relationship with Africa. Since 2008, in an attempt to resolve the conflicts of norms and interests, the EU has proposed establishing a trilateral dialogue and cooperation mechanism between the EU, China and Africa, which so far has not yielded any substantial results. The differences between China’s and the EU’s Africa policies are mainly visible in two areas: aid and security. The contradiction between their respective aid policies lies in China’s ‘no-strings-attached aid’ versus European ‘conditionality’ or emphasis on ‘fundamental principles’. The contradiction between their security approaches in Africa lies in China’s non-interference policy and the European concept of human security. Promoting common normative values and principles is at the core of the Common Foreign and Security Policy (CFSP), which is important for the EU’s self-construction at present. China’s non-interference policy is related to its domestic security and stability and in this context it engages in its own rhetoric. In matters of principle it is difficult for both sides to make compromises or accept limitations imposed by the other. China’s attitude towards the EU initiative has been very cautious. As a rapidly growing global actor, China hopes to be more active in the formulation of multilateral international mechanisms. However, China is also concerned that its African policy and decision-making may be adversely affected and restricted by the ‘common principles’ advocated by the EU and the ‘leading role’ traditionally played by Western powers in international cooperation frameworks involving Africa. Regarding the objective of the trilateral dialogue mechanism, there is a tendency in Europe to understand the dialogue as a one-way process that will ultimately lead to the unilateral socialisation of China. But then the EU has to face another problem: the dilemma of socialisation. On the one hand, the EU tries to spread its norms and values in Africa in order to extend its real power in the world, but its efforts in this regard have been limited by the emergence of other big powers like China. On the other hand, the EU lacks sufficient leverage, i.e. hard power or real power, to persuade China to embrace European norms and values. Where Africa is concerned, China has little interest in internalising European values and norms and even less incentive to do so. This paper seeks to analyse the evolution of the conflict of norms and the conflict of interests between the EU and China in Africa as well as the interaction of norms and interests. In the quest for cooperation and dialogue between the EU and China in Africa, the focus should be on seeking common ground and developing a pragmatic approach. Overemphasising the norms debate at the beginning of this process can only lead to misunderstanding and mistrust, rather than enhancing mutual comprehension and trust. Socialisation is not a process that can be imposed from without. If the objective of the trilateral dialogue is expectation of the unilateral socialisation of one party, the results will inevitably be limited. In competition with other great powers – and sometimes giving rise to dissensions among the EU Member States themselves – the EU’s attempt to spread European norms and values through the concept of unilateral socialisation will only undermine China’s willingness to cooperate with the EU and ultimately weaken the normative power of the Union.