The EU and Brazil: a natural partnership? 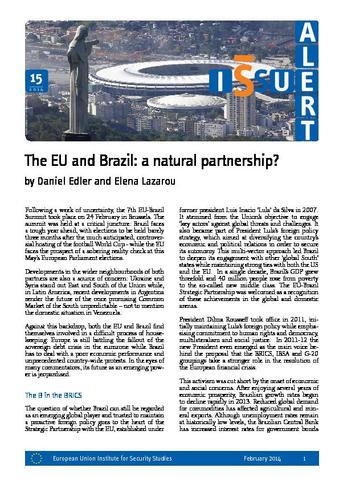 Following a week of uncertainty, the 7th EU-Brazil Summit took place on 24 February in Brussels. The summit was held at a critical juncture: Brazil faces a tough year ahead, with elections to be held barely three months after the much anticipated, controversial hosting of the football World Cup - while the EU faces the prospect of a sobering reality check at this May’s European Parliament elections.

Developments in the wider neighbourhoods of both partners are also a source of concern: Ukraine and Syria stand out East and South of the Union while, in Latin America, recent developments in Argentina render the future of the once promising Common Market of the South unpredictable – not to mention the domestic situation in Venezuela. Against this backdrop, both the EU and Brazil find themselves involved in a difficult process of housekeeping: Europe is still battling the fallout of the sovereign debt crisis in the eurozone while Brazil has to deal with a poor economic performance and unprecedented country-wide protests. In the eyes of many commentators, its future as an emerging power is jeopardised.