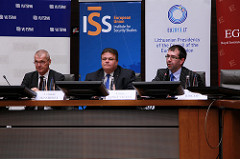 When it was first published, the European Security Strategy (ESS) immediately became a milestone in the development of European strategic thinking.

The conference opened with a speech by H.E. Linas Linkevičius, Minister of Foreign Affairs of Lithuania. Key practitioners and expert academics then looked back, assessing the impact the implementation the ESS has had, as well as forward, addressing the on-going debate about how best to revisit the strategy.

CSDP between internal constraints and external challenges: the road ahead