Environmental and sustainable development in the Mediterranean 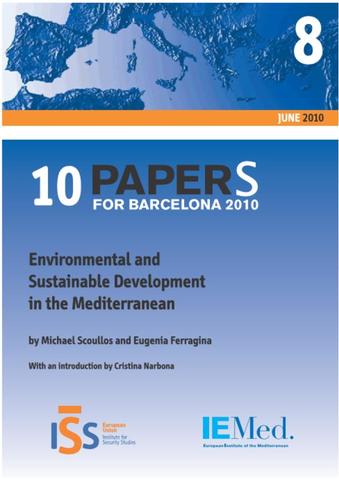 This is the eighth in a series of ten papers jointly published by the European Institute of the Mediterranean (IEMed) and the European Union Institute for Security Studies (EUISS) which aim to address ten critical topics for Euro-Mediterranean relations. The papers have been commissioned with a view to formulating policy options on a set of issues which are central to achieving the objectives set out in the 1995 Barcelona Declaration and the 2008 Paris Declaration, as well as defining new targets for 2020 in the political, economic and social spheres.

This eighth paper looks at the environmental challenges in the Mediterranean and analyses the numerous initiatives adopted in the region since 1975 to confront them. Over the last five decades the quality of the Mediterranean environment has been increasingly degraded by anthropisation. The authors argue that the environmental problems of the region are closely linked to governance gaps and that the major challenge of the region is water scarcity and pollution. Both point out the need to launch long-term planning and governance policies, such as the Strategy for Water in the Mediterranean (SWM). In this respect, Michael Scoullos and Eugenia Ferragina put forward a set of proposals on how the European

Union and its Mediterrane an partner countries should cooperate to achieve an environmental and sustainable development in the Mediterranean.

A deeper Free Trade Area and its potential economic impact