The end of European uniqueness? 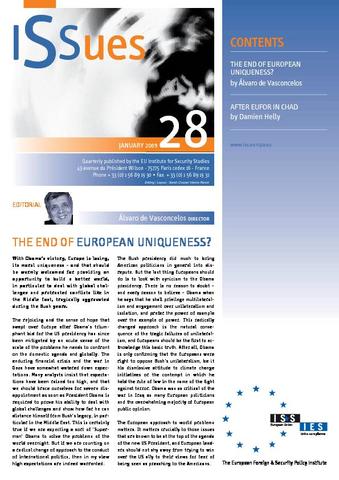 With Obama’s victory, Europe is losing, its moral uniqueness - and that should be warmly welcomed for providing an opportunity to build a better world, in particular to deal with global challenges and protracted conflicts like in the Middle East, tragically aggravated during the Bush administration.

The rejoicing and the sense of hope that swept over Europe after Obama’s triumphant bid for the US presidency has since been mitigated by an acute sense of the scale of the problems he needs to confront on the domestic agenda and globally. The enduring financial crisis and the war in Gaza have somewhat watered down expectations. Many analysts insist that expectations have been raised too high, and that we should brace ourselves for severe disappointment as soon as President Obama is required to prove his ability to deal with global challenges and show how far he can distance himself from Bush’s legacy, in particular in the Middle East. This is certainly true if we are expecting a sort of “Superman” Obama to solve the problems of the world overnight. But if we are counting on a radical change of approach to the conduct of international politics, then in my view high expectations are indeed warranted...

Also in this issue:

After EUFOR in Chad

It is still too early to draw conclusions on the success of EUFOR CHAD/RCA, the EU’s military bridging operation in Eastern Chad launched last March to support a UN military mission deployed there. To start with, the operation is not yet finished (EUFOR’s mandate ends on 15 March this year). Then, it is unclear what level of security is acceptable in such a volatile and heterogeneous area and it is so far almost impossible to quantify the impact that EUFOR has had.

With EU states rejecting any military presence in the Democratic Republic of Congo in support of the UN mission there when it hit crisis-point late last year, the success of the mission in Chad is important not just for the tasks it was sent to do, but for the reputation of EU military operations as a whole and their future in Africa...