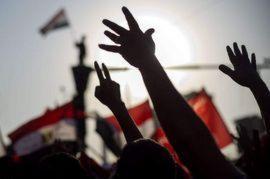 George Antonius’ 1938 book, The Arab Awakening, describes how the influence of Western colonial and missionary activity in the Middle East during the early 20th century led to the renewal of Arab culture and language that eventually culminated in the rise of Arab nationalism. Thus, rather than only being a response to increasing Jewish immigration to Palestine, Antonius claims that Arab nationalism in general — and Palestinian nationalism in particular — rose naturally against the colonial policies of Britain and France. In the Middle East it is often said that history repeats itself. However, this statement is not altogether true; it is not history per se that repeats itself, but rather, history is revisited as a lens through which the present is understood and filtered.

It is therefore not surprising that the ‘Arab awakening’ that started in 2011 is painted as a renewed rise of Arab nationalism against the neo-colonialist, Western supported authoritarian regimes. Only this time, those missionaries that used to teach Arabs how to read and write in their own European languages have instead taught them about Western values of individualism, freedom, and self-government through the language of Facebook and Twitter.  From the historic lessons of the 20th century, the Arab world learnt that the West could not be entirely trusted to practice what it preaches, especially when geopolitical and colonial interests come into play. It is widely believed that this misplaced trust contributed to a range of disastrous and violent outcomes in the Middle East and still plagues Arab societies today. Thus, distrust in the Middle East of the West is deep and highly visible during the current populist transitions, in Egypt in particular.

What does the Egyptian populist transition currently underway really signify? Should we refer to it as the Arab Spring, the Arab democratic wave, the Arab rebellion, or an Arab awakening? Which of these labels help our understanding of the current changes that the region is undergoing, and which of those labels allow the West to take a supporting role?

While it is clear that we have moved long beyond the first Arab Spring rebellions of 2011 (both figuratively and symbolically), we have yet to find out whether we have now entered— as the Israelis seem fond of suggesting — a ‘long Arab winter.’ If ‘Spring’ refers to things ‘getting better’ in the Middle East, it is not a very useful term, at least not in the context of Egypt. On the one hand, the military has kept their promise of holding elections within a year of taking power. On the other hand, they have also safeguarded their own continued role in Egyptian society. The military has suspended a privatisation drive of public sector industries that was begun under the Mubarak government and installed retired generals as their heads. Retired military officers now control everything from regional councils to the oil companies, something that does not bode well for an already fragile Egyptian economy.

For the first protesters at Tahrir Square — whose multiple demands have yet to be met — there is a general feeling that conditions may be getting worse rather than better, especially for women and other minorities. The revolution, it seems, has lost steam. Most recently, on ‘Determination Friday’ where protesters took to the streets to demand that presidential candidate Ahmed Shafiq, who served as Mubarak’s last prime minister, be disqualified through the implementation of the Disenfranchisement Law, (the law disqualifying candidates that had worked under the Mubarak regime during the past 10 years that was passed by Parliament but ignored by the election committee in the case of Shafiq) turnout was lower than expected, especially among Islamist groups. Veteran activist Aida El-Kashef was quoted in Ahram Online afterwards saying, “the Muslim Brotherhood joined the Tahrir Square protests last week to gain the revolutionary vote. Since they have now almost succeeded in this, today is not important for them.”

There are also signs of growing disagreement among the revolutionaries, especially with regard to the stark choice in the run-off between Ahmed Shafiq, and the Muslim Brotherhood candidate, Mohamed Mursi. According to Ahram Online, one protester said that he would vote for Mursi, but it would be “like taking a bitter pill.” Others have also called for a complete election boycott. Most importantly, Mursi has not managed to reassure liberal and minority voters that he supports a civil state governed by a constitution where everyone has equal rights. To the contrary, by stalling the process of drafting the new constitution, the Islamic parties have spread fear among minorities and seculars that once the presidency is in their hands, they will fashion the constitution to their own advantage or according to Sharia law.

However, while the transition is certainly heavily influenced by political Islam, it is also populist in nature, a fact that still provides hope that Egypt will be able to achieve and maintain a certain degree of pluralism. The Muslim Brotherhood has proved to be more moderate than the image that was long promoted in the Western world. As a banned opposition during the Mubarak regime, the ‘brothers’ engaged themselves in social activism and community service, gaining the trust of the population against the corrupt regime. While the group espouses Islamic principles and have advocated a legal grounding in Sharia law, it does so from a societal perspective, rather than from a clerical or fundamentalist position. The Muslim Brotherhood represents the people’s choice and — since the secular revolutionaries were too disorganised to put together an effective party machine — it is the only viable substitute for the Mubarak-era alternative.

Regarding Egypt’s future relationship with the West in general and Israel in particular, things are unlikely to change drastically. When Israelis warn of the signs of an impending ‘long Arab winter’ in a ‘told-you-so’ manner, they seem mostly concerned about themselves and the most immediate threats posed to Israel, but we should not forget that Israel ‘lives’ in a tough neighbourhood, which gives them a slightly different vantage point than Europeans and Americans. Despite certain fears, neither of the two final candidates — Ahmed Shafiq or Mohamed Mursi — have pledged to abandon the 1978 Camp David Accords with Israel. While Mursi has said he would like to “review” the peace treaty, he would be wary of doing anything to risk the annual $2 billion American ‘reward’ to Egypt for keeping the peace. Even if Mursi was content with Egypt forgoing US aid, the Egyptian military — which recieves about $1.3 billion of this sum — would in all likelihood be swift in attempts to convince him to change his mind.

Does Egypt represent a ripple in a larger ‘Arab democratic wave’? The answer depends on what we mean by democratisation. If a democratic transition means that we are certain to move closer to democracy, the answer is no. However, democratisation does not refer to the end goal but to the road travelled. In other words, democratisation is a long process of struggle and readjustment that may lead to a more participatory governing system in the long run.

Much of how this process unfolds will therefore be determined over the next few days. As election results began to come in from overseas locations on Monday, it was clear that Mursi was already in lead by a considerable margin. Should Mursi win, the Freedom and Justice Party of the Muslem Brotherhood will control both the Parliament and the Presidency, a situation that the Supreme Council of the Armed Forces (SCAF) was trying to avoid by endorsing (and re-instating) Shafiq. The whole situation is made more troublesome because the difficult process of putting together a Constitutional Assembly which stalled when liberals and secularists walked out in April in protest of alleged Muslim Brotherhood attempts in trying to dominate the drafting committee. In what was perhaps an indication that the SCAF is expecting a Mursi victory, Field Marshal Hussein Tantawi (head of the SCAF) issued an ultimatum on Tuesday that the assembly be constituted within 48 hours, or the SCAF would draft a blueprint for the panel themselves. Thus, a compromise finally came Sunday morning, determining that the membership of the committee would be split equally between Islamists and non-Islamists and have a mix of politicians and representatives from various societal groups. The Egyptian parliament unofficially approved the new Constitutional Assembly law on Monday.

This compromise may safeguard the democratic process as it prevents the feared scenario that an Islamist-dominated government would draft a constitution to its own liking. Among the things that the Constitutional Assembly will be tasked with is to determine the role of the president, the balance of power between the presidential and legislative branches, and the rights of religious and ethnic groups.

This analysis obviously assumes that the SCAF allows the elections to go through as planned on June 16-17. There have been rumours that the SCAF, nervous of a Muslim Brotherhood victory, may instead opt for urging Egypt’s constitutional court to reverse the electoral commission’s previous decision to ‘ignore’ the disenfranchisement law in the case of Shafiq, in effect ousting the SCAF’s own preferred candidate from the race before the elections. Because the two candidates in the second stage of the elections were determined by a run-off (since neither of the two got more than 50% of the vote) invalidating one of the run-off candidates would most likely cancel the elections altogether, requiring an entirely new process.

Thus, there may be an Arab awakening taking place in Egypt but it is too early to tell whether the country is moving towards democracy. Hence, we are still very far from the ‘End of History’ in the Middle East.

Tova Norlén is currently a TAPIR Fellow at the EUISS.

A democratic transition in trouble: the need for aid conditionality in Egypt