Egypt: a giant with (financial) feet of clay 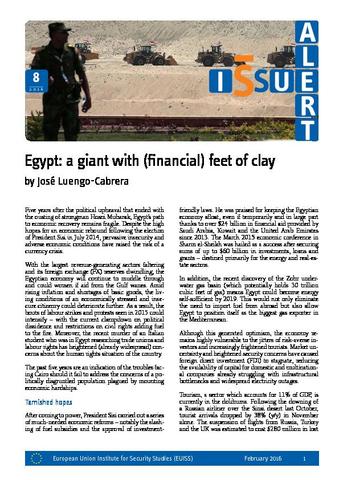 Five years after the political upheaval that ended with the ousting of strongman Hosni Mubarak, Egypt’s path to economic recovery remains fragile. Despite the high hopes for an economic rebound following the election of President Sisi in July 2014, pervasive insecurity and adverse economic conditions have raised the risk of a currency crisis.
With the largest revenue-generating sectors faltering and its foreign exchange (FX) reserves dwindling, the Egyptian economy will continue to muddle through and could worsen if aid from the Gulf wanes. Amid rising inflation and shortages of basic goods, the living conditions of an economically stressed and insecure citizenry could deteriorate further. As a result, the bouts of labour strikes and protests seen in 2015 could intensify – with the current clampdown on political dissidence and restrictions on civil rights adding fuel to the fire. Moreover, the recent murder of an Italian student who was in Egypt researching trade unions and labour rights has heightened (already widespread) concerns about the human rights situation of the country.

Saudi Arabia and the Islamic alliance