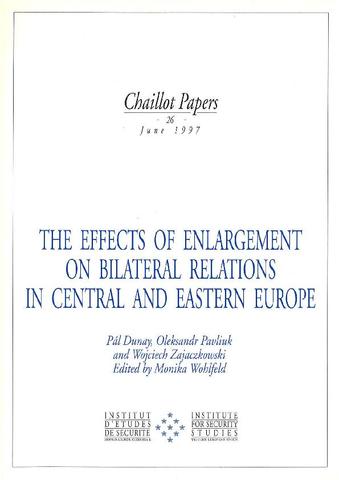 In recent months the Institute has been particularly involved in studying the concerns of countries that are candidates for membership of European security organizations. Seminars organized by the Institute and its participation in conferences have been mainly directed at that very topical aspect of the reform of European security institutions. While closely linked, and complementary, questions of institutional deepening and widening need to be analysed separately. Two seminars have been held at the Institute, in November 1996 and February this year, the latter in the form of working groups, with the aim of analysing the effect of these reforms on relations between neighbouring countries, whose bilateral relationships will remain central to European stability, independently of institutional solutions that will concern them. The results of this work, which are presented in this Chaillot Paper, will, we hope, be a useful contribution to the political thinking and debate that may soon take place in the countries concerned, as well as in WEU, EU and NATO.