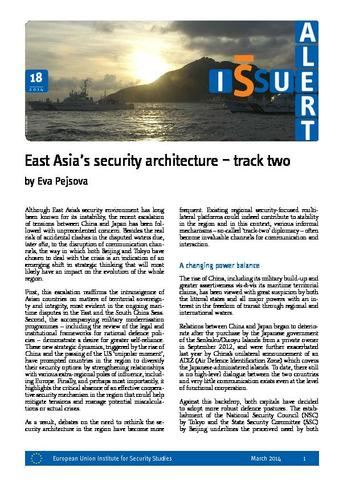 Although East Asia’s security environment has long been known for its instability, the recent escalation of tensions between China and Japan has been followed with unprecedented concern. Besides the real risk of accidental clashes in the disputed waters due, inter alia, to the disruption of communication channels, the way in which both Beijing and Tokyo have chosen to deal with the crisis is an indication of an emerging shift in strategic thinking that will most likely have an impact on the evolution of the whole region.

As a result, debates on the need to rethink the security architecture in the region have become more frequent. Existing regional security-focused multilateral platforms could indeed contribute to stability in the region and in this context, various informal mechanisms – so-called ‘track-two’ diplomacy – often become invaluable channels for communication and interaction.