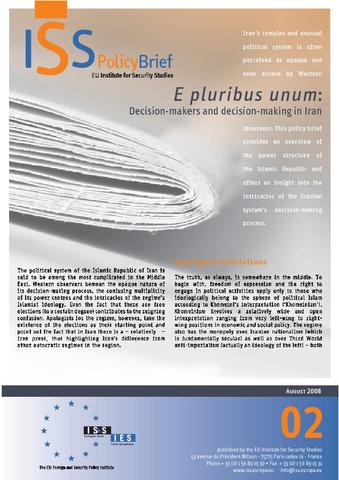 <p style="TEXT-ALIGN: justify">The political system of the Islamic Republic of Iran is said to be among the most complicated in the Middle East. Western observers bemoan the opaque nature of its decision-making process, the confusing multiplicity of its power centres and the intricacies of the regime’s Islamist ideology. Even the fact that there are free elections (to a certain degree) contributes to the reigning confusion. Apologists for the regime, however, take the existence of the elections as their starting point and point out the fact that in Iran there is a – relatively – free press, thus highlighting Iran’s difference from other autocratic regimes in the region.</p>
<p style="TEXT-ALIGN: justify">The truth, as always, is somewhere in the middle. To begin with, freedom of expression and the right to engage in political activities apply only to those who ideologically belong to the sphere of political Islam according to Khomeini’s interpretation (‘Khomeinism’). Khomeinism involves a relatively wide and open interpretation ranging from very left-wing to right-wing positions in economic and social policy. The regime also has the monopoly over Iranian nationalism (which is fundamentally secular) as well as over Third World anti-imperialism (actually an ideology of the left) – both have become part of the regime’s political discourse, albeit only in their ‘Islamised’ versions. Those members of Iranian society who are not Islamists will find it hard to voice their views or to hold high office. There is a fair amount of covert freedom on the cultural and intellectual scene though, but its impact on the Iranian body politic is almost negligible.</p>
<p style="TEXT-ALIGN: justify">Iran’s political system is theocratic in the sense that the ultimate power-holders are clerics. But this does not amount to a fully-fledged theocracy because only a limited number of clerics are employed within the ruling bureaucracy, among them hardly anyone from the highest echelons, the mardjas. The latter are allowed to lead an autonomous existence, although their activities are subject to severe limitations. Apart from clerics, sons and other relatives of clerics and Islamist laypersons are actively engaged in the regime. They can trace back their affiliations to the various Islamist networks, many of them predating the Islamic revolution. Family relations, regional background and the like play an important role in this regard too.</p>