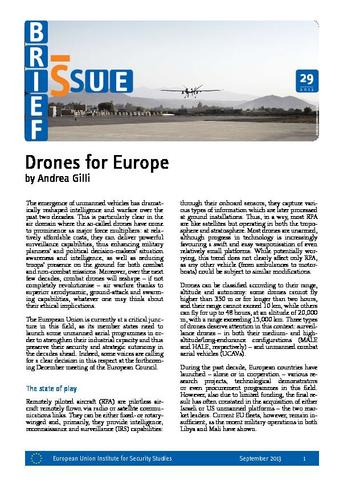 The emergence of unmanned vehicles has dramatically reshaped intelligence and warfare over the past two decades. This is particularly clear in the air domain where the so-called drones have come to prominence as major force multipliers: at relatively affordable costs, they can deliver powerful surveillance capabilities, thus enhancing military planners’ and political decision-makers’ situation awareness and intelligence, as well as reducing troops’ presence on the ground for both combat and non-combat missions. Moreover, over the next few decades, combat drones will reshape – if not completely revolutionise – air warfare thanks to superior aerodynamic, ground-attack and swarming capabilities, whatever one may think about their ethical implications. The European Union is currently at a critical juncture in this field, as its member states need to launch some unmanned aerial programmes in order to strengthen their industrial capacity and thus preserve their security and strategic autonomy in the decades ahead. Indeed, some voices are calling for a clear decision in this respect at the forthcoming December meeting of the European Council.