From decoupling to recoupling. A new security relationship between Russia and Western Europe? 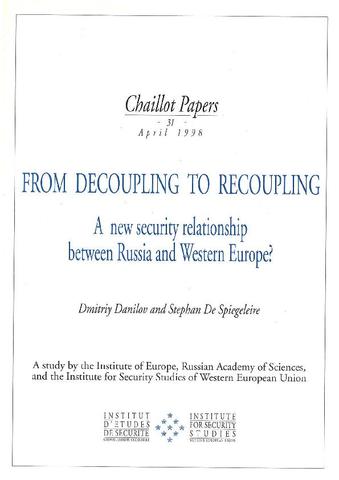 A European security policy is in the making. It received a decisive impulse in 1997, in particular with the Amsterdam Treaty. It will have to take into account a much transformed international scene in which the traditional balance of power and coexistence mechanisms are pushed aside by a renewed attempt at cooperative security that is not bound by rigidly pre-established formulas. It will be a matter not just of institutional belonging, but also of converging behaviour; of appropriate management of many varied and unpredictable circumstances, rather than of hierarchical architectures that define roles and impose responsibilities. The issues at stake are those that lie beyond traditional territorial defence. Bilateral and other restricted multinational contexts may remain best suited to tackling selected strategic issues, but they do not suffice. The pan-European endeavour is about preventing the causes of destabilization and containing crises, and not only about addressing their consequences. And yet Western Europe is still hesitant about its ability to resolve conflicts, since the European Union's rationale has so far been to establish the social and economic conditions conducive to cooperation and reconciliation of differences, in ever-expanding functional and territorial terms. Stability and security nowadays feed on predictability, which in turn implies compatible behaviour and not necessarily pre-established uniform responses, convergent rather than identical interests, in a multidisciplinary, multilayered aggregation of actions. Commonality of purpose and like-mindedness are often more important than reciprocal commitments and formal guarantees. The return to multilateralism that we have witnessed since the end of the Cold War has been an integral part of the wide-ranging reform undertaken by Moscow itself, in international relations and domestic matters, in what has been described as the 'common European home'. Russia has a role to play in the Common Foreign and Security Policy to which the European Union is committed. Russia is an essential term of reference and must become an active contributor to the reconciliation and rehabilitation of the common historical and cultural traditions, on a continental scale. The challenge and the historical opportunity that lie before Russia are to consider if and to what extent it is prepared to supplement its wider responsibilities, which persist, with an equally strategic involvement alongside the other European nations, by adding security cooperation to economic integration. The shared vision of a new Europe may emerge gradually and practically also from common, either joint or converging, responses to specific circumstances as they arise and require a decisive European contribution. They range from mediation and negotiation to peace support and interposition, particularly in areas adjoining Europe, but also in the European regions in transition. Following ministerial indications, the Institute for Security Studies of the Western European Union and the Institute for Europe of the Russian Academy of Sciences have undertaken an in-depth analysis of the possible scope and modalities of an enhanced structural and operational relationship between the Russian Federation and the countries that make up the emerging West European security identity. The views expressed here are shared by the two Institutes. Given the many factors at play, they do not, nor can they, constitute a blueprint. The paper is intended to promote public debate, with the increasing involvement of the public, electorates and policy-makers. It should contribute to an exchange of ideas, concerns, ambitions and frustrations, and thus clarify the sense of direction to be taken by West European and Russian policies alike.