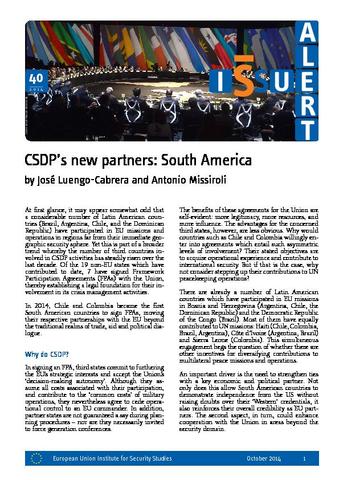 At first glance, it may appear somewhat odd that a considerable number of Latin American countries (Brazil, Argentina, Chile, and the Dominican Republic) participate in EU missions and operations in regions far from their immediate geographic security sphere. Yet this is part of a broader trend whereby the number of third countries involved in CSDP activities has steadily risen over the last decade. Of the 19 non-EU states which have contributed to date, 7 have signed Framework Participation Agreements (FPAs) with the Union, thereby establishing a legal foundation for their involvement in its crisis management activities.

In 2014, Chile and Colombia became the first South American countries to sign FPAs, moving their respective partnerships with the EU beyond the traditional realms of trade, aid and political dialogue.