Crisis in Chad: implications for the EU 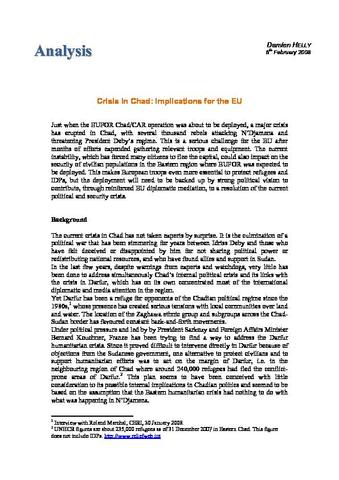 Just when the EUFOR Chad/CAR operation was about to be deployed, a major crisis has erupted in Chad, with several thousand rebels attacking N’Djamena and threatening President Deby’s regime. This is a serious challenge for the EU after months of efforts expended gathering relevant troops and equipment. The current instability, which has forced many citizens to flee the capital, could also impact on the security of civilian populations in the Eastern region where EUFOR was expected to be deployed. This makes European troops even more essential to protect refugees and IDPs, but the deployment will need to be backed up by strong political vision to contribute, through reinforced EU diplomatic mediation, to a resolution of the current political and security crisis.<br /><br />The current crisis in Chad has not taken experts by surprise. It is the culmination of a political war that has been simmering for years between Idriss Deby and those who have felt deceived or disappointed by him for not sharing political power or redistributing national resources, and who have found allies and support in Sudan.
In the last few years, despite warnings from experts and watchdogs, very little has been done to address simultaneously Chad’s internal political crisis and its links with the crisis in Darfur, which has on its own concentrated most of the international diplomatic and media attention in the region.