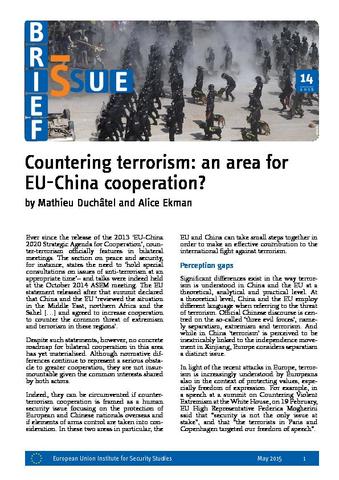 Ever since the release of the 2013 ‘EU-China 2020 Strategic Agenda for Cooperation’, counter-terrorism officially features in bilateral meetings. The section on peace and security, for instance, states the need to ‘hold special consultations on issues of anti-terrorism at an appropriate time’– and talks were indeed held at the October 2014 ASEM meeting. The EU statement released after that summit declared that China and the EU ‘reviewed the situation in the Middle East, northern Africa and the Sahel […] and agreed to increase cooperation to counter the common threat of extremism and terrorism in these regions’. Despite such statements, however, no concrete roadmap for bilateral cooperation in this area has yet materialised. Although normative differences continue to represent a serious obstacle to greater cooperation, they are not insurmountable given the common interests shared by both actors.