Cooperation in peacekeeping among the Euro-Mediterranean armed forces 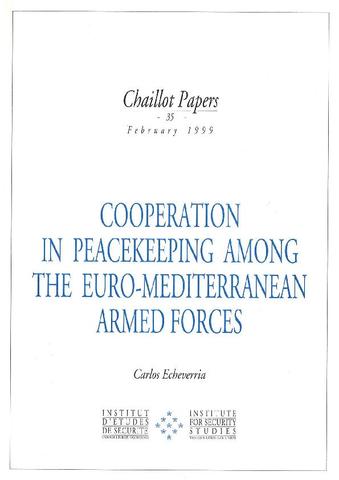 Cooperative security will increasingly replace the traditional balance of forces mechanisms, to the extent that multilateralism spreads as the means by which states are coping with the manifold new challenges to the prosperity and security of their citizens. The borderline between international humanitarian concerns and the definition of national interests is therefore also fading. The need to utilize military instruments for non-military purposes is indeed broadly accepted. But how these 'peacekeeping operations' should be undertaken depends on specified circumstances. In order to be effective and sustainable over time, they rely on the consent and participation of recipients as much as on institutional legitimacy. When the Berlin wall crumbled, the fear was expressed that the reintegration of Europe might occur at the expense of Mediterranean requirements. The Euro-Mediterranean Partnership launched by the EU in 1995, an essentially political endeavour, should have dispelled this notion. And yet, security cooperation is still kept waiting at its margins, clearly in need of a more confident attitude, including by Europe's Mediterranean partners. This Chaillot Paper, written by a former research fellow of this Institute following a seminar on Mediterranean countries' approaches to peacekeeping held at the Institute in June 1997, seeks to demonstrate that the experience and confidence acquired by the armed forces of non-European Mediterranean nations in many peacekeeping operations can be put to good use for broader, region-wide initiatives. But, as WEU moves closer to EU, EU's approach to the Mediterranean can only be demand-driven, proactive. The considerations expressed here are submitted to a wider debate between WEU and its Mediterranean partners, in the promotion of the security dialogue that WEU has been developing with them.

The Mediterranean Union Initiative and the Barcelona Process