China’s energy demands: are they reshaping the world? 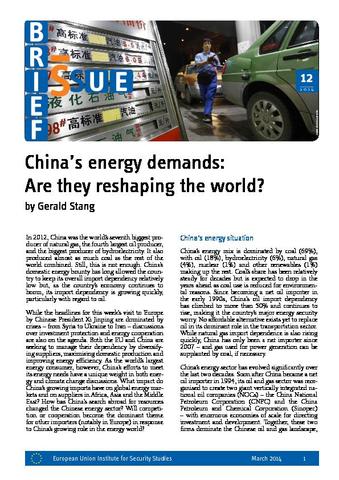 In 2012, China was the world’s seventh biggest producer of natural gas, the fourth largest oil producer, and the biggest producer of hydroelectricity. It also produced almost as much coal as the rest of the world combined. Still, this is not enough. China’s domestic energy bounty has long allowed the country to keep its overall import dependency relatively low but, as the country’s economy continues to boom, its import dependency is growing quickly, particularly with regard to oil. While the headlines for this week’s visit to Europe by Chinese President Xi Jinping are dominated by crises – from Syria to Ukraine to Iran – discussions over investment protection and energy cooperation are also on the agenda. Both the EU and China are seeking to manage their dependency by diversifying suppliers, maximising domestic production and improving energy efficiency. As the world’s largest energy consumer, however, China’s efforts to meet its energy needs have a unique weight in both energy and climate change discussions. What impact do China’s growing imports have on global energy markets and on suppliers in Africa, Asia and the Middle East? How has China’s search abroad for resources changed the Chinese energy sector? Will competition or cooperation become the dominant theme for other importers (notably in Europe) in response to China’s growing role in the energy world?