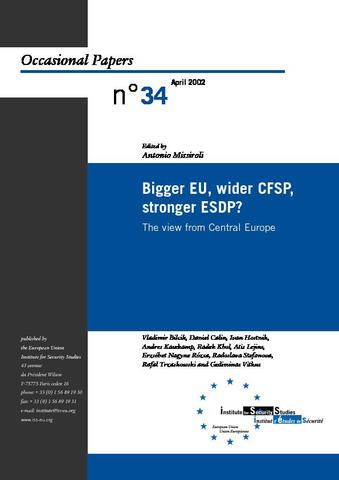 This paper collects the papers delivered by a group of mostly young researchers from the ten Central European candidate countries in response to a grid of common questions submitted to them by the Institute for Security Studies in 2001. The considerations that follow summarize the main results of the project, compare the national views, and put them in a broader political context. The enlargement of the European Union is a security policy in itself. It is a security policy by other means, so to speak, and a security policy in its own right. By other means, because extending the Union's norms, rules, opportunities and constraints to the applicants makes instability and conflict in the region much less likely. And it is a security policy in its own right, too, because the entrants bring in interests and skills that broaden the scope of the common external policies . This was the case with the first enlargement of the European Community, with the British (and Danish) outreach overseas and gradual Anglo-Irish détente via Brussels. All the more so with the Southern enlargements of the 1980s paving the way to the successful completion of post-authoritarian transitions, a significant reinforcement of the Community's presence in the Mediterranean basin, and an equally significant extension of European influence in the Americas. Finally, the 1995 enlargement of the newly created EU brought more stability to the Baltic 'rim' and strengthened the Union's drive to cooperate with the UN and the OSCE. It marginally altered the internal balance between allied and non-allied member States, but it also favoured - albeit indirectly, as a sort of compensation for those EU members who felt penalised by the Central and Northern "drift" of the Union - the launch of the Barcelona process. The current enlargement, however, is nothing like the previous ones. It is fundamentally different in size, scope, and character. It is likely to change quite radically the institutions, the policies, even the nature of the Union . To what extent and exactly how will it affect the way in which the EU projects itself externally? In other words, what CFSP and ESDP will the enlarged Union end up with? Needless to say, answering such questions always entails a strong element of guesswork. In fact, actual membership per se may alter the expectations, the priorities and, ultimately, the behaviour of the former applicants. To a certain extent, the fact that membership is closer now than it was a few years ago has already altered their attitude and influenced their foreign policy decisions. Moreover, in a Union of more than 20 members, alliances and coalitions may easily shift according to the contingencies and the issues at stake. What can be assessed at this stage, therefore, is only what priorities, preferences, general attitudes and specific interests the current applicant will bring into the present Union of Fifteen. What will happen from day one after accession is bound to remain a guessing game. In this respect, much as nuances persist among the ten Central European candidates (due also to their different historical experience, geopolitical position, sheer size, and available resources), some discernible common features emerge from the contributions collected in this Occasional Paper.

Turkey and the EU: strategic implications for Central Europe