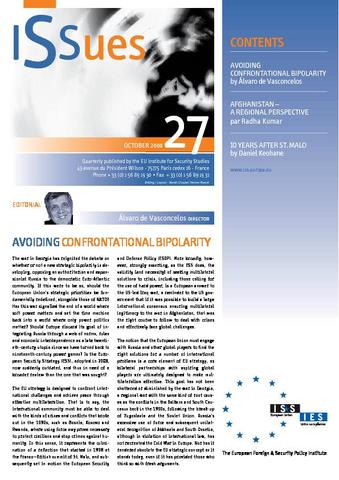 The war in Georgia has reignited the debate on whether or not a new strategic bipolarity is developing, opposing an authoritarian and expansionist Russia to the democratic Euro-Atlantic community. If this were to be so, should the European Union’s strategic priorities be fundamentally redefined, alongside those of NATO? Has this war signalled the end of a world where soft power matters and set the time machine back into a world where only power politics matter? Should Europe discard its goal of integrating Russia through a web of norms, rules and economic interdependence as a late twentieth-century utopia since we have turned back to nineteenth-century power games? Is the European Security Strategy (ESS), adopted in 2003, now suddenly outdated, and thus in need of a broader review than the one that was sought?

The EU strategy is designed to confront international challenges and achieve peace through effective multilateralism. That is to say, the international community must be able to deal with the kinds of crises and conflicts that broke out in the 1990s, such as Bosnia, Kosovo and Rwanda, where using force may prove necessary to protect civilians and stop crimes against humanity. In this sense, it represents the culmination of a reflection that started in 1998 at the Franco–British summit of St. Malo, and subsequently set in motion the European Security and Defence Policy (ESDP). More broadly, however, strongly asserting, as the ESS does, the validity (and necessity) of seeking multilateral solutions to crisis, including those calling for the use of hard power, is a European answer to the US-led Iraq war, a reminder to the US government that if it was possible to build a large international consensus ensuring multilateral legitimacy to the war in Afghanistan, that was the right course to follow to deal with crises and effectively face global challenges.

The notion that the European Union must engage with Russia and other global players to find the right solutions for a number of international problems is a core element of EU strategy, as bilateral partnerships with aspiring global players are ultimately designed to make multilateralism effective. This goal has not been shattered or diminished by the war in Georgia, a regional war with the same kind of root causes as the conflicts in the Balkans and South Caucasus back in the 1990s, following the break-up of Yugoslavia and the Soviet Union. Russia’s excessive use of force and subsequent unilateral recognition of Abkhazia and South Ossetia, although in violation of international law, has not recreated the Cold War in Europe. Nor has it rendered obsolete the EU strategic concept as it stands today, even if it has provided those who think so with fresh arguments.