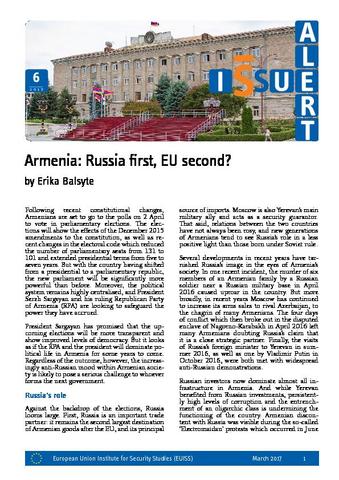 Following recent constitutional changes, Armenians are set to go to the polls on 2 April to vote in parliamentary elections. The elections will show the effects of the December 2015 amendments to the constitution, as well as recent changes in the electoral code which reduced the number of parliamentary seats from 131 to 101 and extended presidential terms from five to seven years. But with the country having shifted from a presidential to a parliamentary republic, the new parliament will be significantly more powerful than before. Moreover, the political system remains highly centralised, and President Serzh Sargsyan and his ruling Republican Party of Armenia (RPA) are looking to safeguard the power they have accrued.

President Sargsyan has promised that the upcoming elections will be more transparent and show improved levels of democracy. But it looks as if the RPA and the president will dominate political life in Armenia for some years to come. Regardless of the outcome, however, the increasingly anti-Russian mood within Armenian society is likely to pose a serious challenge to whoever forms the next government.