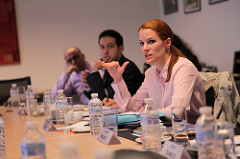 The Arab Foresight Group was an initiative undertaken by the EU Institute for Security Studies to bring together experts on the Arab World from Europe and the southern neighbourhood to discuss the most pressing issues in the Middle East and North Africa (MENA) region over the next the ten years. Three meetings, with a pool of fifteen experts, were held between April and July 2014. The issues at hand were: where is the Arab world going? How do we prepare for changes? Can we prevent further instability? The first Arab Foresight Group meeting was held on 30 April 2014 at the EUISS headquarters in Paris, and took the form of an informal brainstorming session. The second took place in the EUISS Brussels Liaison Office on 13 June 2014. The discussion shifted to anticipating future developments in the Arab World, in particular through training on how to foresight. It then reconvened in Brussels for a third and final meeting on 30 July 2014. There, panellists were asked in advance to prepare a scenario and bring a wild card to the table in order to generate a fruitful discussion. The resulting EUISS report, Arab Futures: three scenarios for 2025’is due to be published in December 2014.