Amsterdam's unfinished business? - The Blair government's initiative and the future of the Western European Union 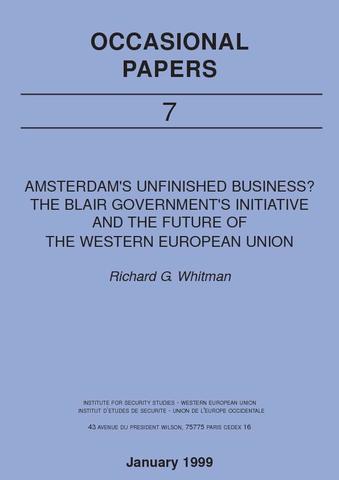 The British Government has recently launched a new initiative by making clear that it would like to see an enhancement of the European Union’s capacity to have recourse to military force. This represents both an opening of the British Government’s mind on the European Security and Defence Identity (ESDI) and a re-opening of a debate on the European Union’s relationship with the Western European Union (WEU). The aim of this paper is to throw light onto the initiative and to highlight some of its consequences.
This paper commences by outlining the position that the British Government under Prime Minister Blair has now adopted. The contrast that the new initiative represents from the positions previously adopted by the present, and past, UK Governments is highlighted by detailing the British Government’s view on the appropriate relationship between the EU and the WEU during the 1996 Intergovernmental Conference (IGC). The rationale for the UK Government’s shift of position is discussed. Furthermore, a set of factors that delineate the extent to which the Blair Government will contemplate changes to existing European defence arrangements are detailed.
The second part of the paper turns to the consequences of the change of stance by the British Government. The key observation is that, as the UK Government, which was the primary opponent to deepening of the relationship between the EU and the WEU, is now taking a different position, past reform proposals become relevant again. Alternative futures for the EU-WEU relationship that were put forward during the 1996 IGC are therefore used to provide a backdrop to a discussion of the possible future scenarios for the defence competences of the European Union.
The final section of the paper highlights issues requiring immediate consideration and poses questions that will require early answers if the current UK Government wishes to successfully retain the initiative in the debate it has launched on the future relationship between the EU and the WEU.

Participation and influence: Finland, Sweden and the post-Amsterdam development of the CFSP