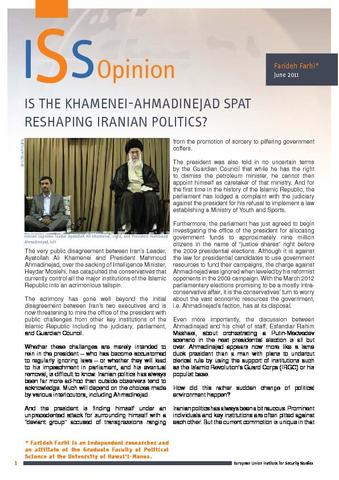 The very public disagreement between Iran’s Leader, Ayatollah Ali Khamenei and President Mahmoud Ahmadinejad, over the sacking of Intelligence Minister, Heydar Moslehi, has catapulted the conservatives who currently control all the major institutions of the Islamic Republic into an acrimonious tailspin.

The acrimony has gone well beyond the initial disagreement between Iran’s two executives and is now threatening to mire the office of the president with public challenges from other key institutions of the Islamic Republic including the judiciary, parliament, and Guardian Council.

Whether these challenges are merely intended to rein in the president – who has become accustomed to regularly ignoring laws – or whether they will lead to his impeachment in parliament, and his eventual removal, is difficult to know. Iranian politics has always been far more ad-hoc than outside observers tend to acknowledge. Much will depend on the choices made by various interlocutors, including Ahmadinejad.